I was talking with some coworkers the other day and someone started talking about black bean flour and how it’s supposed to be a healthy gluten free alternative. She reads a number of food/nutrition blogs and it sounds like it’s becoming pretty popular so I figured it would be worth looking into.

Black bean flour is made by grinding up black beans into a fine powder. Which means it’s also gluten free and contains more protein and fibre compared to all-purpose flour. I decided to find out what all the hype was about.

I have to admit that finding black bean flour was trickier than expected. It’s not as common an ingredient that I thought it would be and I ended up buying a bag of Bob’s Red Mill black bean flour at St. Lawrence Market. 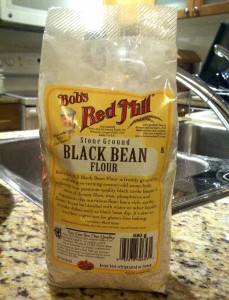 When I opened the packaged, I noticed that the flour had noticeable dark flecks scattered throughout. It also has a slight bean flavour to it so you will have to use it in a recipe where the colour won’t affect the end results. I figure that brownies would be a good recipe due to their dark colour and the fact that they have a number of other flavours going on which will help mask the slight bean taste. I used it the same way as all-purpose flour and substituted it in a one-to-one ratio. 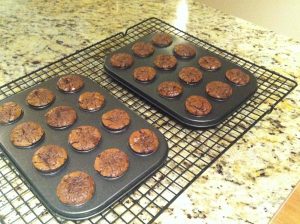 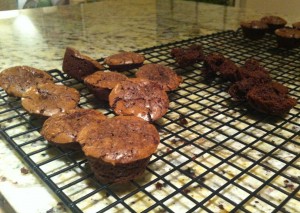 When I put them in a side by side taste test, most people couldn’t taste the difference. Some people mentioned that the brownies made with all-purpose flour were slightly more soft while the brownies made with black bean flour were a little more dense and provided more satiety. Some people also said that they could taste a slight lentil-y/beanie flavour but most people admitted that you really wouldn’t notice it if you weren’t paying attention.

Would I continue to use black bean flour? At $6.99 for a 680 gram bag…probably not. It’s quite a bit more expensive than all-purpose flour and I find it to be quite limiting in terms of what recipes I can use it in compared to other gluten free flours.

Directions:
Preheat oven to 350°F. Grease a 9×13 baking pan.
In a small bowl, combine flour, cocoa powder, baking powder and salt. Whisk and set aside. In a medium saucepan over low heat, melt the butter and chopped chocolate. Remove from heat. Add sugar and eggs. Mix to combine. Add the flour mixture and combine until just moistened. Do not overmix. Fold in 3/4 cup chocolate chips. Transfer batter into prepared pan. Smooth top. Add the remaining chips to the top of the brownies. Bake in pre-heated oven for 50 to 60 minutes or until a toothpick inserted in centre comes out slightly sticky.