My colleagues always have hummus as part of an afternoon snack with cut up vegetables. Thinking that it was made primarily out of chickpeas (also known as garbanzo beans), I figured it was mostly healthy but not so! It can be high in fat because it also contains tahini (sesame seed butter) and vegetable oil which brings the fat content up quite a bit. So it’s pretty much like any other dip (except it has some added protein because of the chickpeas).

I see hummus everywhere these days. Most stores carry it and it’s available in a variety of flavours (there’s even wasabi flavoured hummus). With hummus so readily available, why even bother making it from scratch? Does making it from scratch taste that much better? We did a similar taste test with guacamole and homemade/fresh guacamole won by a landslide so I figured it would only be fair to give homemade hummus  a chance. 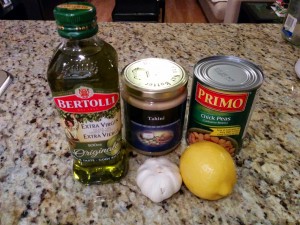 Hummus is very easy to make and just has a few simple ingredients: chickpeas, garlic, tahini, lemon juice and oil. Traditionally it’s made with tahini (this was the hardest ingredient to find) but some people substitute other nut butters or leave it out all together and just add more oil.

I always say that to truly appreciate what you’re buying, it’s always best to make it from scratch at least once so that you understand 1) how it’s made and 2) if it’s worth the extra cost of convenience.

I even took it a step further and made hummus using canned chickpeas (which was a cinch) as well as dried chickpeas (okay, I’ll admit – that was quite a bit of work).

How to cook dried chickpeas (aka garbanzo beans):

Soak the chickpeas overnight (they will expand to 2-3x their size). Drain the water and rinse the beans before cooking.

If you are “short” on time you can also “quick soak” them by putting in a large pot of water, bring it to a boil and then remove it from heat and let them soak in the hot water for an hour.

Place the overnight soaked or quick soaked beans in a pot of water. Bring to a boil and then reduce to a simmer. Cook for 60-90 minutes until tender.

Once the beans are cooked, drain the water and cool them in an ice water bath.

This next part is optional. You can either use them as is or you can peel the thin skin that is on them. Yes, this process is tedious but apparently it leads to a creamier hummus. The easiest way to peel chickpeas is to gently squeeze the chickpea between you thumb and next two fingers and it should pop out leaving the skin behind. Repeat this process for all the remaining chickpeas. Is it tedious? Yes! Is it worth it? I’m not sure yet – it depends on what my taste testers say. 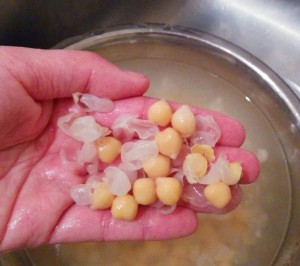 How to make hummus
Recipe adapted from Allrecipes.com

Directions:
Place the chickpeas, tahini, lemon juice and garlic in a blender or food processor. Blend until smooth. Add salt to taste. Transfer mixture to a serving bowl. Drizzle olive oil and sprinkle with paprika. 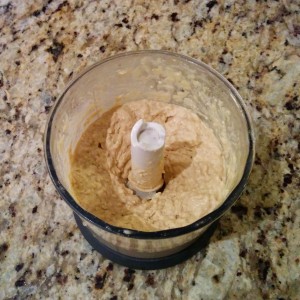 I bought the following varieties of hummus to have my taste testers try and vote for their favourite one:

Both of the store-bought brands had a creamier texture and a stronger more acidic flavour which worked in their favour because the taste of hummus mellows out when used as a dip. The texture was smoother and creamier than the hummus that was homemade (even the one with the peeled chickpeas).

In general, all four varieties tasted very similar to each other. It was actually really difficult to come to a decision but the majority of taste testers voted for the Sabra brand because it had the strongest taste.

I also preferred a store bought brand over the homemade versions. I chose Fontaine Santé due to the creamy texture. I actually liked the Sabra brand the least because I found the flavour to be too strong. Just goes to show that everyone’s taste buds are different 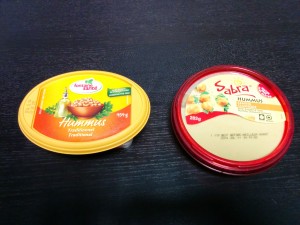 So there you have it! You can totally go out and buy store bought hummus. It tastes just as good as homemade and you can find it in a variety of flavours (roasted red pepper, basil pesto, chipotle, etc). But if you have the pantry items on hand, hummus is a simple thing to make and you’ll save some money (especially if you need to make large quantities of it).  You can also tailor the taste/texture to your liking. The shelf life of homemade versus store bought hummus is pretty similar as well (4 to 7 days).

Seeing that it is available in so many different flavours, I would personally just choose to buy it already made for the variety. Plus I don’t usually have tahini in my kitchen.

Is there a certain brand of hummus that you like to buy? Or do you prefer to make it yourself? Let us know in the comments below!