Chocolate pudding isn’t something that I grew up eating so I didn’t even know what it was made of. Basically it’s just cocoa, sugar and milk thickened up with cornstarch. Sounds simple enough.

I don’t see it made from scratch that often but I do see it on grocery store shelves packaged in already portioned out plastic cups or boxed up as an instant mix. In fact, I have heard that it isn’t worth making chocolate pudding from scratch when you can just as easily buy a mix. With all these convenience versions of chocolate pudding floating around, is it really worth the extra time it takes to make from scratch? 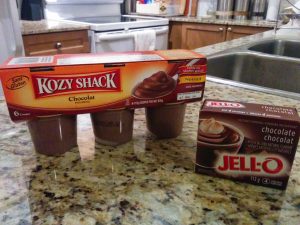 Directions:
In a saucepan, stir together sugar, cocoa, cornstarch and salt. Place over medium heat, and stir in milk. Bring to a boil, and cook, stirring constantly, until mixture thickens enough to coat the back of a metal spoon. Remove from heat, and stir in butter and vanilla. Let cool briefly, and serve warm, or chill in refrigerator until serving.

First of all, it’s pretty hard to justify making something from scratch when ithe convenience forms are available everywhere. Plus chocolate pudding is pretty simple so I don’t see there being a lot of taste variations between the different types. What I like about the convenience varieties is that they don’t require any cooking. Making chocolate pudding from scratch requires you to bring the mixture up to a boil in order for the cornstarch to thicken and boiling milk can be a tricky thing (it has a tendency to burn).

I brought the following varieties of chocolate pudding for my taste testers to try:

During preparation, the instant chocolate pudding mix was my favourite because it was considerable less expensive ($1.49/box) than the store bought/ready made type ($5.49/6 half cup servings). It was also super fast because all you have to do is add milk and stir. No cooking required. I can see this being super handy if you needed chocolate pudding as part of another recipe such as mud pie.

However, making things from scratch will always win out in the cost savings department because it will usually be cheaper (especially if you need to make large quantities).

It doesn’t take a lot of extra effort to measure out the dry ingredients but it’s cooking it over the stove top that can be a little tricky as milk has a tendency to burn. You also have to let it cook for at least 10 minutes in order for the cornstarch to thicken.

Because it was my first time making chocolate pudding, I made the mistake of not cooking it long enough. (I cooked it to the point where it coated the back of a spoon and I thought it would thicken up more upon cooling but it didn’t.) So it was noticeable thinner than the other chocolate puddings. The taste testers also noticed that the homemade chocolate pudding didn’t have the same intensity of chocolate flavour compared to the convenience versions. If I were to make it again, I would have to cook it until it becomes a lot thicker. But would I?

It’s a hard sell to make chocolate pudding after getting such great results from a boxed mix where I just had to add water and stir (no cooking required)! However, some super tasters on the panel noticed that the Jello instant pudding mix had a slight chemically powdery flavour whereas Kozy Shak had a more clean tasting flavour. 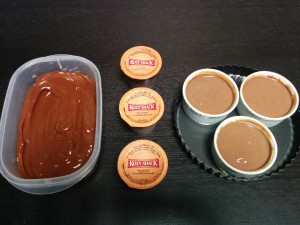 In terms of what the taste testers preferred,the results were all over the place! Half of the taste testers preferred the Jello instant pudding mix due to the thick viscosity and the fact they grew up on the taste and it reminded them of childhood. The other half were split between Kozy Shak and homemade because they felt it had a cleaner flavour. Kozy Shak prides themselves on using wholesome ingredients which was reflected in their ingredient list – which is great.

I would actually prefer to choose the Jello instant pudding mix because it produces such a great product in a matter of seconds and is much cheaper than buying Kozy Shak. The only concern I have however, is the fact that it has slightly more salt compared to if you were to make it from scratch (430 mg vs. 250 mg which is approximately the amount in a pinch of salt) and one of the ingredients is hydrogenated soy bean oil. Dun dun dun….this is a bad type of fat that people who have high cholesterol or elevated blood lipids need to avoid.

Although Kozy Shak is the most expensive out of the products that were presented, they make a good product with wholesome ingredients. The sodium content of their chocolate pudding is also well within reason. So if I didn’t mind the extra cost of convenience, I would have no problem choosing Kozy Shak over homemade.

So there you have it. After making chocolate pudding from scratch, would I go through all that trouble to make it again? Probably not. However, it really depends on how much I need to make (and if I want to perfect my chocolate pudding making skills). However, I am happy with either of the convenience versions and if I were to spend the time to make a simple chocolate dessert I would much prefer to make chocolate mousse.