You may have seen a new type of sugar in the super market – coconut sugar. Part of me isn’t surprised, especially with the rise of coconut related food items that have become popular over the past several years. In additional to coconut milk and shredded coconut, there is now coconut water, coconut oil, coconut manna, coconut flour and coconut sugar.

How is coconut sugar made?

Coconut sugar (also known as coconut palm sugar) is made from the flower blossoms of the coconut palm. It’s a traditional sweetener in Asian and South-East Asian where coconut palms grow. (Note: It’s not the same as palm sugar which comes from a different plant – the date palm and sugar date palm, sago palm or sugar palm.)

The stem of the coconut blossom is cut and the sap that drains out is collected in a container. This sap is then heated until the liquid turns into an amber, thick fluid which eventually becomes a thick syrup. The syrup is left to cool and is eventually dried and crystallized.

Is coconut sugar better for you?

Coconut sugar has become a popular sugar choice for people with diabetes because it has a lower glycemic index compared to honey and cane sugar. Its texture and appearance is similar to brown sugar and demerera sugar. It is sweet with a distinct caramel taste and costs $6 for a 500 gram jar. However, it still contains 80% sucrose and should be used sparingly.

It behaves similar to white sugar when heated and can be substituted instead of regular sugar in a 1:1 ratio. It does have a distinct flavour, which can interfere with the end product, but some people report that the caramel flavour lends itself quite well to certain baked goods.

Would I use it? I personally wouldn’t because of the cost (it costs about 10 times as much as regular white sugar). However, I can see health conscious individuals or people with diabetes choosing this sugar because of its lower glycemic index (especially if they’re not comfortable using artificial sweeteners).

It might have a lower glycemic index and be less refined, but I wouldn’t go so far as to call it ‘healthy’.

I’d actually prefer that people use whatever sweetener they prefer and use less of it. It can take awhile for the taste buds to adapt but after awhile, you may find that sweet items that you used to enjoy taste overly sweet. 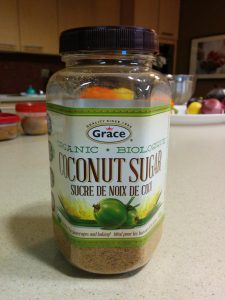 For more information about coconut sugar, check out the articles below.