Like many Canadians everywhere, I celebrated Canada Day outside next to a barbecue. But unlike many Canadians, I added a Cantonese twist by making Chinese BBQ pork (aka char siu). My friends have been wanting to learn how to make homemade char siu ever since I told them about this great recipe I learned from my barbecue-style cooking class at George Brown College. Plus I can’t think of a better way to celebrate Canada Day – yes, I am Canadian (born and raise) but I’m also Chinese so this seemed like a great way to celebrate both.

Normally I wouldn’t bother making homemade char siu since there are plenty of places in Toronto where you can buy char siu. But when we made this recipe in cooking class and I tasted char siu right out the oven…well, it tastes better than the char siu in Chinatown! I have to thank my chef instructor who pawned this recipe off one of his colleagues who spent a good number of years working at a Chinese restaurant (I hope he doesn’t mind). There is some prep as you need to marinade the pork overnight, and baste it several times while cooking. But if you really think about it, it’s no different than how you would barbecue other kinds of meat (we are talking slow and low barbecuing here as opposed to “grilling”).

If you are looking for something to barbecue this weekend and have always wanted to try make homemade char siu, here is how to do it (by the way, there is a short cut option that I have provided at the end).

Combine all marinading ingredients in a bowl.
Coat and marine pork strips for 8-12 hours.

BBQ method:
In a barbecue, cook over indirect heat on rack with a skillet with 1 cm water to catch drippings.
Baste several times with reserve marinade. Cook until tender and caramelized for around 45 to 60 minutes (and until the internal temperature reads 160 degrees F).

*Oven method:
Preheat oven to 350 degrees F.
Place marinaded pork on a baking rack place on a baking sheet. Pour water on baking sheets (just enough to cover) to catch pan drippings. Baste several times while cooking (I recommend making a small batch of the same marinade for this purpose).
Cook until tender and caramelized for around 45 to 60 minutes (and until the internal temperature reads 160 degrees F).

*Note: I have tried this recipe both ways and recommend using either a barbecue or convection oven (vs. a regular oven). Both a barbecue and convection oven will provide enough air circulation to properly caramelize and candy the outside. 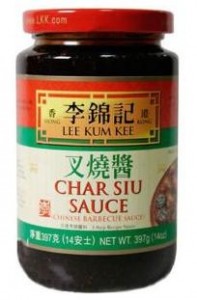 By the way, there is short cut to this recipe – instead of preparing the marinade, you can buy a jar of Lee Kum Kee char siu sauce. We actually did a side-by-side taste comparison and have to admit that Lee Kum Kee char siu sauce yields acceptable results (plus it gives the pork that characteristic bright red colour that you are probably used to). This is great option for people who don’t have all the Chinese spices and condiments in their kitchen and want to try making char siu but don’t want to buy entire bottles of ingredients they aren’t familiar with.