I have the pleasure of introducing a guest blogger and fellow nutrition professional today – Tressa Alleyne.

Tressa is a graduate from the Nutrition and Food program at Ryerson University and is currently applying to do a Master of Health Science in Nutrition Communications. She has experience working as a dietitian’s assistant, nutrition associate at the Hospital for Sick Children, nutrition educator at a community health centre and dietary aide at the University Health Network and a retirement residence. She aspires to work as a renal dietitian and as a diabetes educator.

She is looking into a product that was launched recently – Burger King Gratifries. Are they worth choosing over regular fries? Read on to see what she had to say.

Burger King has put a new spin on a menu item that traditionally has nothing to do with being health conscious. They have introduced Gratifries (in French-speaking Quebec, they’re called MagniFrites) – a healthier French fry with 40% less fat. I’ve seen countless advertisements on television, in newspaper articles and broadcasted on the radio.

Gratifries have a crinkle-cut design and less fat and calories because they are made with a different type of batter (which doesn’t absorb as much oil).

As a nutrition professional, this product piqued my interest because Burger King is the first to introduce this type of product to their menu which could influence other fast-food chains to do the same.

The problem is most people associate low fat with being low in calories and conclude that it also must be healthy – but this is not always the case. I did my own little experiment to see if Gratifies were any good compared to regular French fries.

The Gratifries were less salty and less crispy compared to regular French fries (possibly due to the thickness of their crinkle cut design and the fact that they had cooled off by the time I received them). They also tasted a bit soggy in the middle (possibly due to the size difference of the fries). The oil used for the Gratifries tasted as though it had been recently replaced with clean oil compared with what was used on regular fries as the regular fries had a heavier taste. 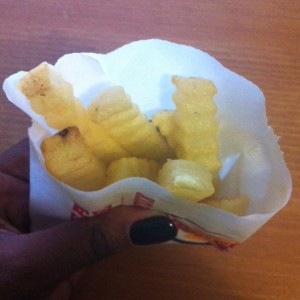 The Gratifries didn’t hold together well and were cut too thick (in my opinion). To be honest, it reminded me of McCain French fries (the ones you’d find in the frozen food section of the grocery store). 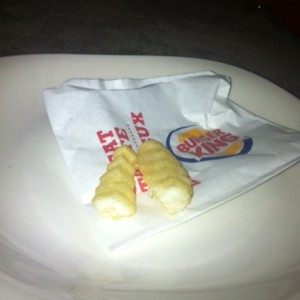 If you were looking for a great tasting French fry, I wouldn’t recommend Gratifries. I think it’s a good idea but the formulation still needs some work in order to make them a viable alternative.

A $0.30 increase in price isn’t that much of a sacrifice to save yourself from consuming an additional 7 grams of fat and almost 100 calories but I found Gratifries less satisfying compared to the regular French fries. I do like the fact that Burger King is moving in this direction as it would make it easier for dietitians to recommend healthier food choices. I realize that this is a far cry from being a solution to the dilemma of how to make people eat better but at least it’s a step in the right direction.

In general, I only buy fries from fast-food restaurants like Burger King as an occasional treat when I’m in the mood for something greasy, so I’m not sure if the Gratifries would be my go to choice as I would rather go for the real thing since I don’t have them that often. Meanwhile, a regular Burger King customer might be inclined to switch over as a way to help lower their overall fat consumption if they were in the mindset of making positive changes. However, most regular Burger King customers (especially French fry purists) may not find this to be an equally good substitute. I can see customers wanting to eat more as a way to compensate as a result of their disappointment.

It looks like Gratifries may not be gratifying enough.