I have a confession to make, I have never made pulled pork – ever and yet it seems so popular these days. For some reason I always thought it was really complicated, involved advanced skills or fancy cooking equipment.

In fact, the first time I tried pulled pork from the grocery store (and not at a pub or restaurant) was when my co-workers and I were taste testing the Recipes to Riches products from season 1. We tried the Slow and Lo pulled pork and thought it was a hit. All we knew at this time was that pulled pork took a long time to make so what a great idea to have it available frozen and ready to eat in 15 minutes? We thought it was brilliant!

We looked it up on the President’s Choice (PC) site and noticed that it only got fair reviews (3.5/5). I read some of the comment and although a lot of people liked the product, there were some comments from a few very pulled pork passionate customers who wrote “It looks like dog food” or “I was embarrassed to serve this”. This got me thinking, how could a product that I thought was so great, be abhord so much by other people? Was I in the dark about pulled pork and just didn’t know any better? I decided to make pulled pork from scratch (no shortcuts) to see what I was missing out on.

From the initial research I did for this taste test I soon realized why some people would see the PC pulled pork as being an inferior product. There is a whole group of people who are barbecue and smoker enthusiasts.  I’m sure that they believe the only worthy way of making pulled pork is by using a smoker. I can imagine that the flavour from having pulled pork prepared this way would be just off the charts. But guess what? I don’t have a smoker.
Nor do I have any desire to check on the pulled pork every couple hours in the smoker to rotate it, place more smoke chips or whatever else is involved. So my team of fellow foodies (a caterer and two food photographers) and I used the following three methods of making pulled pork and compared the results:

My thoughts:
I have a feeling that there are some things that a roast coated in a dry rub overnight and having browned in the oven just can’t be beat by shortcuts like slowcooking pulled pork or buying it pre-cooked/frozen. I am secretly hoping, however, that the slow cooker pulled pork will be acceptable because it is just so easy to make! I have a feeling that after trying both of these methods, that the frozen/packaged pulled pork form PC just won’t cut it anymore.

Taste testers:
Please try each type of pulled pork and comment on taste and texture. Which one do you like the most? Is it worth using a dry rub overnight and 3-6 hours in the oven for pulled pork or is the slowcooker method/frozen store-bought variety acceptable as well? 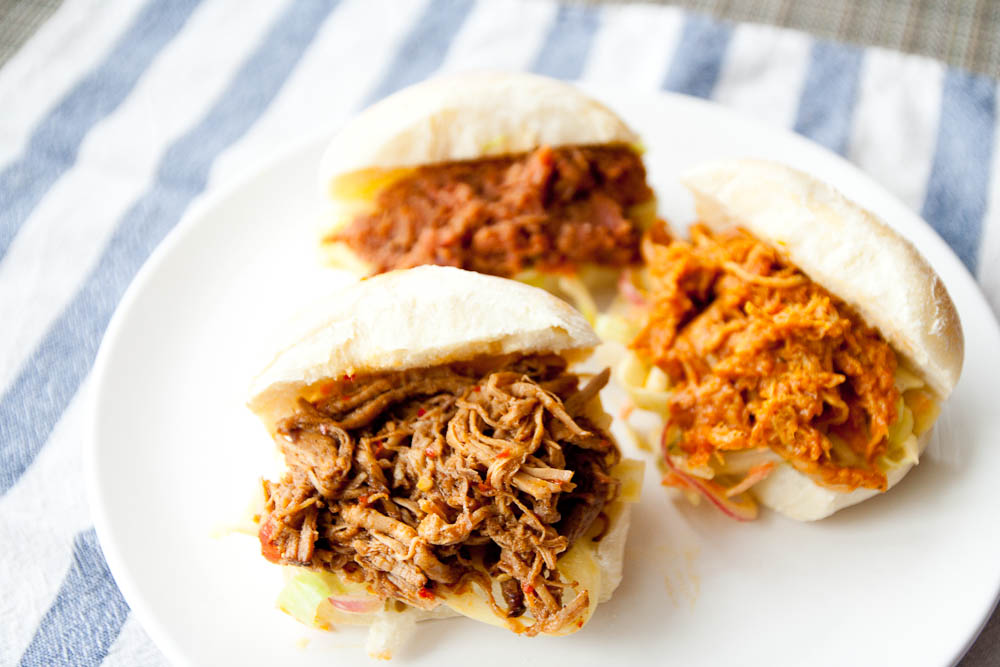 The results:
Oh my goodness! The texture of the oven roasted pulled pork was by far superior to the frozen one (very mushy, it does resemble dog food actually) and the slow cooker pulled pork. The pork strands were defined, yet firm which provided great texture. However, the flavour was too vinegary which was upsetting. I will have to see if I can find a better recipe for barbecue sauce because everything was going so well up to that point (the pork tasted delicious when it came out of the oven) but once we added the sauce everything went downhill. So disappointing. It tasted way too sour! We didn’t realize at the time that the barbecue sauce recipe that we used was for a Carolina style barbecue sauce (which is vinegar based and not ketchup based.) Oops!

The slow cooker pulled pork wasn’t bad in that you could see the pork strands but the texture wasn’t as firm as the oven roasted pulled pork and it was quite a bit spongier. It was getting a little close to the ‘mushy side’. Mind you, we were using pork tenderloin instead of pork shoulder so it was quite a bit grainier and dry because it’s much lower in fat.

However, you couldn’t really taste a big difference once the barbecue sauce was added to it. It tasted great and from a preparation standpoint, I can see why that recipe is so highly reviewed (cinch to prepare and it tastes great despite being lower in fat – amazing). The frozen pulled pork, besides tasting really good, does in fact look like dog food and unfortunately, the sad appearance cannot be ignored. So now that I know what pulled pork is actually supposed to look like, I will definitely choose the oven method from now on (and use a barbecue sauce that I like).

5 thoughts on “Pulled pork – the art of BBQ…or not”