I came across a recipe for the “Best-Ever Vegan Chocolate Cupcakes” and thought “This looks interesting. I wonder what this would taste like”. Vegan diets don’t include any animal products so typical ingredients such as eggs, milk and butter are not included in the recipe.

It also just so happens that I had a housewarming party to go to this weekend where the owner is vegan so I figured what a great opportunity to do a vegan vs. non-vegan cupcake taste test? I wonder if people will be able to tell the difference (or which one is vegan or not). I figure they probably will. 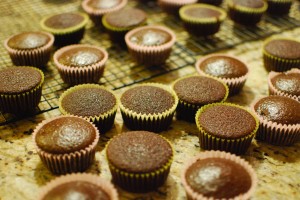 For this taste test I prepared two types of chocolate cupcakes. One using a regular recipe for chocolate cupcakes (which included eggs, milk and butter) and another recipe for vegan cupcakes (which used soy milk and vegetable oil). I also prepared two types of frosting (the frosting was actually easy to modify since all I had to do was substitute Becel – vegan instead of butter).

My thoughts:
Wow – cupcakes without eggs, milk or butter? Oh my! For some reason I think that the vegan cupcakes will come out being a lot more dense or they won’t rise as much. I also think that they might taste oily and take on a bit of the soy milk flavour compared to their regular chocolate cupcake counterpart.

Taste testers:
Please try each type of cupcake and indicate if you notice any flavour, texture and visual differences between the two. Which one do you think is vegan? Do you like one more than the other or do you think that both cupcakes are equally good?

The reveal:
Thank you everyone for submitting your comments. Here are the results:

Cupcake A: Regular
Cupcake B: Vegan

All of the taste testers noticed the color difference. This is due to the fact that I used two completely different recipes where one called for Dutched cocoa (which is darker) vs. non-Dutched cocoa (which is more red in color). I am very surprised that the taste of the soy milk did not come through in the flavour of the vegan cupcakes. The texture was more dense (which I suspected would happen).

However, the major difference was in the icing. I made two different types of icing for this taste test as well (regular buttercream icing for the regular cupcakes and a vegan icing (where I used Becel – vegan instead of butter) for the vegan cupcakes. The difference between the two icings was obvious. However, I’m thinking that perhaps by adding less water to the vegan icing, I might be able to make it closer to the texture of the regular one.

Anyways, not bad for my first vegan taste test! I can see myself taking this a step further and actually doctoring up recipes and ‘veganizing” them by substituting soy milk instead of regular milk, flax instead of eggs and shortening or vegan margarine instead of butter. Perhaps in a future taste test? We’ll see!

Bottom line:
It is possible to have vegan baked goods that taste great. They aren’t necessarily going to be more oily but the recipes do require some tweaking in order to make sure that they turn out okay. To see the method used for these cupcakes, please refer to blog post titled “Food Lab: Vegan cupcakes“. I used a vegan-specific recipe that I found rather than making substitutions to a non-vegan recipe. I have to admit, that this recipe was really good. We’ll have to see if I get as good results when making vegan substitutions to regular baking recipes.

12 thoughts on “Vegan cupcakes: Do they taste any good?”