For this taste test we sampled the following cheeses:

Taste testers:
Please try each of the cheeses and comment on taste, appearance and which one you like more.
Would you choose one over the other for the health benefits of having a lower fat cheese?

The Reveal:
Thank you everyone for submitting your comments. Here are the results:
Cheese A: Dofino Creamy Havarti
Cheese B: Dofino 25% Less Fat Havarti

Some interesting points:
When both cheese were just taken out of the fridge (and still cold), the flavour of the creamy havarti was sharper and more pronounced compared to the 25% less fat version. However, when both cheeses were brought up to room temperature the opposite was true (the regular havarti had a more subdued flavour and the lower fat cheese had a sharper taste). However, most people agreed that the texture was noticeably different between the two cheeses with the creamy havarti being a lot creamier. 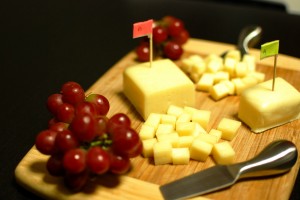 One thing to note about reduced fat cheeses: Just because they are labeled reduced fat doesn’t necessarily mean they are low fat (or low calorie). Reduced fat simply means that the product contains 25% less fat than the original version (and is for the most part, a relative statement). Low fat, on the other hand, means a product contains 3g of fat or less per serving and 30% or less of total calories.

So even though you’re saving on some fat grams, eating the reduced fat version doesn’t give you permission to eat a lot more of it (since it’s only a difference of 20 calories/serving). You can save on some of the fat grams over time (especially if you’re at an event where there is quite a bit of cheese). However, if you’re watching your weight it’s best to limit your intake of cheese overall.