When I told my coworkers about the results of a French fry taste test I had done and my disappointment with frozen McCain Superfries a couple of them spoke up and said “There is actually a certain brand that I think is really good – Cavendish Farms”.

Since I always try to see if there is a more convenient way of doing things (and since I had leftover potatoes) I decided to do a second taste test against homemade French fries against a recommended store bought brand: Cavendish Farms. Both were prepared in the oven. 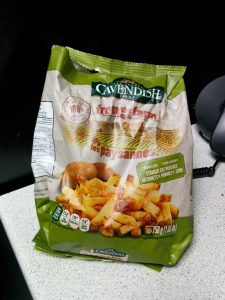 If you have a large family (or throwing a party), buying bags of the frozen stuff won’t be economical in which case you’re better off buying a 5 lb or 10 lb bag of potatoes and making a load of fries. However, Cavendish French fries are a great option if you are looking for convenience.

One thing is for certain though, whether you choose to bake frozen or homemade French fries, the key is not to crowd the pan. French fries require good air circulation in order to allow them to crisp up.

I still recommend that people make French fries from scratch at least once so they at least know how to make it instead of having to rely on a store-bought solution. It’s good practice and a technique can be applied to other recipes like potato wedges or roasted potatoes. You can also alter the size of French fries you make (match stick, steak fries, wedges, etc) and can adjust the seasonings based on what you prefer. Plus it ends up being cheaper overall. Learning how to making French fries from scratch is still well worth it.

Check out this video on how to make oven baked fries.