Now that we are well into spring (almost summer) I have been seeing tons of rhubarb at the farmer’s market and grocery stores. Rhubarb isn’t something that I grew up eating. In fact, when I first tried it I found it quite sour and didn’t care much for it. But I saw it at the market the other day and decided that now is the time to give it a try. 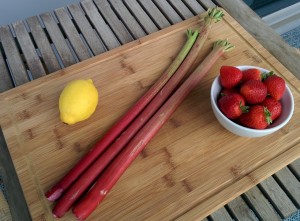 Rhubarb is a stalky plant (it’s actually a vegetable but people usually prepare it as a dessert so it’s often mistaken as a fruit) that looks similar to celery except it’s red in colour. It tastes totally different though. It is sour and tart which lends itself nicely to sweet and sour desserts. 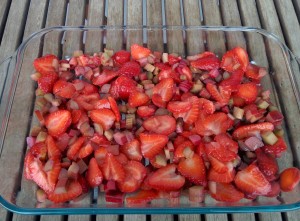 Rhubarb pairs beautifully with strawberries (because strawberries are also tart as well as sweet) so I decided to make a classic rhubarb and strawberry crisp. 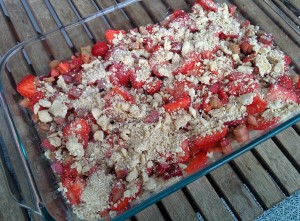 The rhubarb thickens up quite a bit when cooked (there is flour in the mixture but I found it to be quite viscous compared to other fruits) and has this gummy, jammy kind of texture. It would lend itself nicely to pies, turnovers and compotes.

If you aren’t familiar with using rhubarb, I would recommend making a classic and easy rhubarb crisp. It is simple and less involved than making pie (you don’t have to make the dough) and you can make it with simple pantry items (sugar, flour, oats).

Directions:
Preheat oven to 375 degrees F (190 degrees C).
In a large bowl, mix white sugar, 3 tablespoons flour, strawberries, and rhubarb. Place the mixture in a 9×13 inch baking dish.
Mix 1 1/2 cups flour, brown sugar, butter, and oats until crumbly. You may want to use a pastry blender for this. Crumble on top of the rhubarb and strawberry mixture.
Bake 45 minutes in the preheated oven, or until crisp and lightly browned. 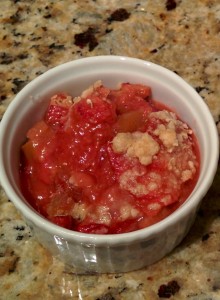 Would I cook with rhubarb again? Personally, I would rather use apples, blueberries or other fruits to make a crisp but if I was overrun with rhubarb I wouldn’t be opposed to using it again.

How about you? How do you use rhubarb?