Skip to content
I recently started reading a food magazine called Lucky Peach. The Spring issue had a an interesting article comparing haute cuisine to haute couture. It explained how a famous chef would come up with a truly original idea and how that idea would make its way down the culinary food chain from fancy tasting menus, to chain restaurants and eventually to the frozen food section at the local grocery store. The food item that they featured: molten lava cake turned mug cake.
They talked about how the first lava cake is credited to the famous French chef, Michel Bras who patented his chocolate coulant (french for “runny”). He was the first one who created individually portioned lava cakes which involved placing chilled ganache inside cake batter and freezing it overnight. The result: a cake that is cooked on the outside with the inside still runny. This idea made it’s way to other Michelin starred restaurants and then down the ranks to casual dining restaurant chains, theme parks and now the frozen food section of grocery stores and Wal-mart. But wait – it doesn’t end there. The most recent rendition of Michel Bras’ chocolate coulant is chocolate mug cake. Mix the ingredients into a microwave safe mug and microwave for 2 minutes. Voila! An individually-sized chocolate cake with a runny centre (all with just the push of a button). 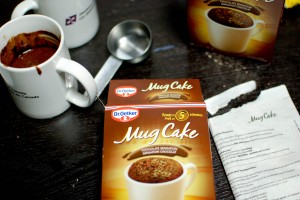 For today’s taste test we will be trying two types of mug cake:

Taste testers:
Please try a bit of each one and comment on the appearance, texture and flavour. Which one do you like more? Would you make mug cake?

My thoughts:
I am a lot more aware of preservatives and additives in boxed mixes and how that can effect the taste. However, in previous taste tests, they have sometimes been hard to detect (it depends on the mix). I think that this mix will be less forgiving because it only calls for the addition of milk (no eggs). The homemade version calls for eggs, milk and vanilla so I think the texture and taste will be better overall due to these fresh ingredients.

But who knows? It’s a mug cake! What will they think of next?

The reveal:
Thank you everyone for submitting your comments. Here is the reveal:

Cake A: From a mix
Cake B: From scratch

The results:
There were mixed reviews with both the instant and homemade mug cakes. The instant one was too dry and the homemade one wasn’t sweet enough. However, neither of these mug cakes were runny in the middle. And even as a regular chocolate cake, they both didn’t look appealing.

But people were floored by the amount of calories in one mug cake – 420 calories! If I’m going to treat myself to something that has that many calories, it had better be worth it.

My advice:
Treat yourself right and take the time to measure out the ingredients, grab a muffin tin and bake some nice lava cakes in the oven (it takes less than 30 minutes). Or if you prefer, just go out and get yourself a really nice piece of cake. There are so many better options such as going to your local grocery store and buying a single piece or buying a box of frozen desserts that come individually wrapped.

As for a microwavable cake in a mug: I’d reserve this method in case of emergencies (i.e your oven is broken or you have a serious (and I mean serious) chocolate cake craving). Or if you feel like demonstrating it for the fun/novelty factor.