I grew up on Eggo waffles which my family would buy in the frozen section of the grocery store. They were quick and easy you all you had to do was pop them in the toaster. It was great. I can understand why people would choose to buy frozen waffles, because not everyone has a waffle iron and those things can take up quite a bit of counter space. But frozen pancakes? Yes, they sell those too! 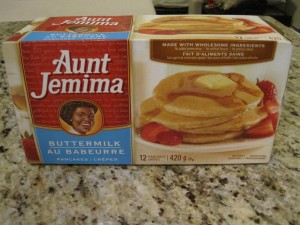 Of course once I saw this I had to set up a pancake taste test – frozen, vs. pancake mix vs. from scratch. I can see the merits of pancake mix because it does save you the time and effort of having to measure out the dry ingredients. And who has time in the morning to measure out dry ingredients anyways? But frozen pancakes? I doubt that they’d taste any good or be worth the money when it’s pretty easy to make them from a mix.

Today we will be taste testing three types of buttermilk pancakes as well as real maple syrup vs. pancake syrup. 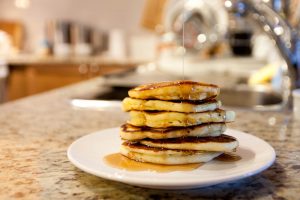 My thoughts:
I think the frozen pancakes will have the least amount of flavour out of all three. I think that the homemade pancakes will taste the best overall but the pancakes made from a mix will be a close second.

I think pancake syrup will be a lot sweeter than maple syrup and won’t have as complex a flavour. I think I will prefer the taste of maple syrup from a taste standpoint.

Taste testers:
Please try each type of pancakes and comment on the taste, texture and flavour. Which one do you like the most and why? Do you think it’s worth making buttermilk pancakes from scratch?

Please comment on the appearance, taste and texture of maple syrup vs. pancake syrup. Which one do you like more? Is there one that you prefer with your pancakes and why?

The results:
Although the frozen pancakes looked absolutely perfect and were the easiest to make, they tasted the worst out of the three. They were the least fluffy and had a strange cardboard-like after taste.

Surprisingly, there was very little taste differences between the homemade buttermilk pancakes and the ones made from the mix. But the ones made with a mix had a more fluffy texture than the ones made from scratch. What a huge upset! However, this could be due to the fact that we made the homemade pancakes the morning of and didn’t rest the batter for at least 3 hours which the recipe called for. I am usually a big fan of having homemade products win but in this case the pancake mix wins from a convenience standpoint. 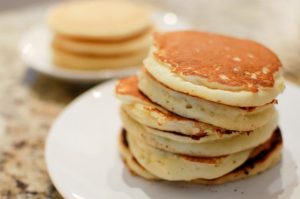 Bottom Line:
It’s totally worth buying pancake mix for the convenience as it makes a great product and is one less thing to worry about first thing in the morning. It does cost more but it saves you from having to measure out a bunch of dry ingredients (and letting the batter rest for at least 3 hours) for perfect pancakes. For people who don’t bake a lot or have all the dry ingredients on hand, Aunt Jemima pancake mix is a great choice. Sometimes it’s worth paying more for the convenience.

But if you happen to have the ingredients in your kitchen are the organized type who plans your breakfast the day before, by all means, make them from scratch! With the money you save (it’s about half the cost) it pays to be organized.

4 thoughts on “You can buy frozen pancakes, really?”