My fellow food blogger (the sassy cook) and I have always wanted to do a taste test on rice pudding. It is one of our favourite desserts and since there are so many types of rice pudding available in the grocery store we figured this would be a good experiment to take on. We consulted a number of recipes and decided on a simple recipe for stove top rice pudding. However, we weren’t sure which type of rice to use to make rice pudding (basmati, jasmine, Arborio, parboiled, instant, etc) so we decided to test them all. We used the best one to make the rice pudding for our Rice pudding – homemade vs. store bought taste test.

Stovetop Rice Pudding – 6 to 8 servings
Recipe from: The Joy of Cooking 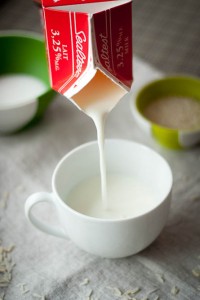 ¾ cup medium- or long-grain white rice
1 ½ cup water
¼ tsp salt
4 cups whole milk
½ cup sugar
½ tsp vanilla
Combine  rice, water and salt in a large heavy saucepan. Bring to a simmer over medium-high heat, then reduce the heat to low, cover, and simmer until the water has been absorbed, about 15 minutes.

Stir in milk and sugar.

Cook, uncovered, over medium heat for about 30 minutes, stirring frequently, especially toward the end of cooking. The pudding is done when the rice and milk have made a thick porridge. Do not overcook.

Remove from the heat, and stir in vanilla.

Spoon into a serving bowl or six 5- to 6-ounce custard cups or ramekins. Press plastic wrap directly onto the surface to prevent a skin from forming. Serve warm, at room temperature or cold. If you wish, sprinkle with ground cinnamon. 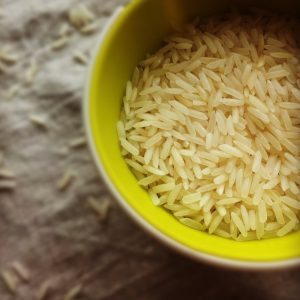 Which rice is the best rice to use for rice pudding?

Here is a list of the different types of rice that we tested:

Basmati and jasmine rice are both long grain rices. I figured they would both offer good structure and texture to the rice pudding but might be too fragrant. I thought the Arborio rice would produce a rice pudding that was thick and creamy but that the Japanese sushi/short grain rice might end up too mushy or gummy because of the stickiness that Japanese rice cooks up to. I had a feeling that the regular long grain might turn out to be the best one in that it would still provide texture but would not have the fragrance that Basmati and Jasmine rice have. We also tested parboiled and instant rice just for fun. My guess was that the parboiled and instant rice would have a strange processed, plasticky flavour based on how parboiled and instant rice taste in general and that they wouldn’t absorb the liquid that well. 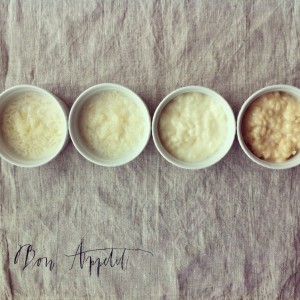 Observations:
The basmati rice pudding had a nice texture from the nice long grains of the rice but you could definitely taste the basmati fragrance. The Arborio rice pudding was creamy, chewy and thick. I almost found it to be too thick and chewy and it had a softer texture overall. The sushi/short grain rice pudding was nice and creamy but the flavour actually tasted more muted. It was almost as if the starchiness interfered with the sweetness and the flavour. The long grain regular rice pudding had the nice texture like the basmati rice pudding but with a more neutral flavour. I really liked that one from a texture and flavour standpoint. The jasmine rice pudding also had a nice texture. It was similar to long grain regular but it wasn’t as fragrant as I was expecting it to be. I could hardly taste the fragrance (but this might be due to the fact that jasmine rice is the rice that I eat the most often and I’m used to the taste). Both the long grain rice pudding and the jasmine rice puddings tasted very similar from a taste and texture standpoint and these were the ones I preferred overall. 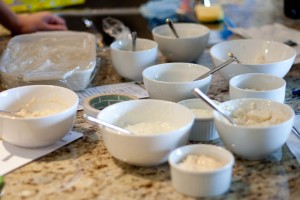 All of these different types of rice (except for instant and parboiled) made a good rice pudding and it would be hard to tell the difference unless you were really concentrating. However, we would not recommend that you use parboiled or instant rice. Both of these types of rice resulted in rice puddings that had a cooked, processed/parboiled aftertaste and the texture of the rice was still firm/al dente resulting in a rice pudding that was neither soft nor creamy – definitely not acceptable.

5 thoughts on “Rice pudding – what type of rice to use?”