Skip to content
This holiday season I made mulled wine for the first time and loved the result! I consider it the winter version of sangria in that it helps to warm you up on a chilly night and has all these lovely festive, hearty flavours that one associates with winter. I started talking about mulled wine at work and the majority of my coworkers had never tried it.
A week later I saw that President’s Choice makes a mulled apple cider which got me thinking…..this could be a nice 2-in-1 product (apple cider + spices) which could make mulling wine even easier! Could you just add mulled apple cider to wine and have a good mulled wine?
Sure, it kinda sounds like using mojito mix (yuck) instead of making mojitos with fresh lime and mint but the flavours in mulled wine are festive and hearty versus light and refreshing. I figured it would be worth a shot. 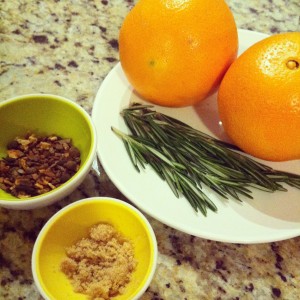 To add another aspect to this taste test, another coworker brought up the fact that you can also buy mulling spices (pre-packaged/combined spices) for mulling apple cider or wine. Wow! There sure are a lot of options out there for mulled wine/apple cider (some people also mull tea as well). Now, I know that making mulled wine is a cinch to make, but short cuts are always nice.
This experiment is to see if you can simplify the process of making mulled wine if you were in a pinch or didn’t want to buy separate assorted spices that you’d hardly ever use. And anything that makes life a little less hectic during the holiday season is welcome in my books!

Today we will be trying mulled wine that was prepared three different ways:

My Thoughts:
I generally don’t like to mess with tradition so I have a feeling that the mulled wine prepared from scratch will win hands down. But I do hope that the version made with mulled-apple cider will be a strong contender! The mulled apple cider tastes delicious on its own and wouldn’t it be nice to have a simplified version of mulled wine that tastes just as good? I think that the pre-packaged mulling spices will be too overpowering (I think the recipe on the back of the label is totally off).

Taste testers:
Please try a sample of each wine and comment on appearance and flavour. Which one do you like most? Is it worth taking short cuts?

The results:
People generally found the mulled wine made with pre-mulled apple cider or pre-packaged mulling spices to be flat and one dimensional. Some taste testers mentioned that the pre-packaged mulling spices overpowered the wine and made it taste burnt and bitter. Wine A with the pre-mulled apple cider didn’t fare much better. It also tasted flat and the mulled spices didn’t carry resulting in a flat and somewhat overpowering flavour.

Bottom Line:
It`s definitely not worth taking any sort of short cut when wine is involved. Wine has this wonderful volatility that really carries flavours and essences. When we tried just using mulled apple cider the mulled wine tasted flat and one dimensional.

The pre-packaged spices were expensive and gave poor results as well (tasted bitter). To be honest – I would try tweaking the recipe on the back of the label next time to see if I could get better results. A recipe isn`t provided for mulling wine (only for mulling apple cider) so you`ll need to experiment.

Multi-dimensional is the word that best describes the mulled wine that was prepared from scratch. The flavours of the ingredients really come out when simmered with the wine and compliment each other. The result is a full, well rounded flavour that is really brought when tasting the wine.