Skip to content
I was having dinner with my co-workers the other day when one of them mentioned that it would be fun to have a guacamole taste test between a homemade recipe, a pre-made/pre-packaged version from the grocery store (Mad Mexican) and a commercial/restaurant version from Chipotle.
My coworkers love guacamole so it didn’t take a lot of convincing. They all agreed that it would be a lot of fun to have a guac off. Two of my coworkers volunteered to make the homemade ones based on tried and true recipes that they use. Another two of my coworkers brought in the store bought varieties – Mad Mexican and Chipotle. Which guacamole will come out on top?

Here are the guacamoles that we will be taste testing today:

My thoughts:
This is going to be interesting. Part of me thinks that homemade guacamole *should* taste better because of the freshness of the ingredients compared to the pre-packaged one from the grocery store. But this could vary based on the recipe and quality of the ingredients used. I think that both homemade varieties will rank better than the grocery store guacamole but I think that the restaurant/take out guacamole will come out as the overall winner.  If the restaurant is any good, they will also be using fresh ingredients plus they have the added advantage of having a recipe that has been proven to be reliable, tried, tested and deemed profitable since they are making batches of it and selling it everyday.

Taste testers:
Please sample each of the guacamoles and comment on appearance, texture, taste. Which one do you like the most and why?

Thank you for you comments. Here is the reveal:

A: Homemade A
B: Mad Mexican
C: Homemade B
D: Chipotle

All four of the guacamoles were similar in appearance but they all had very different taste profiles. Homemade A was simple and the taste of the avocado really shone through. Mad Mexican had a noticeable taste of chillies and spiciness which some people thought was overpowering and distracting to the overall flavour of the avocado. Homemade B had the addition of several ingredients including tomato, hot sauce and cumin. Some taste testers found the flavours to be a little too complicated. However, this guacamole was also prepared the day before which resulted in the consistency being more watered down and the flavours not as pronounced. (Hint: When serving guacamole, make it about 3 hours before serving as this will allow the flavours to combine but serve it the same day as the ingredients will still taste very fresh).  Chipotle won from an appearance standpoint as the guacamole was the brightest green out of all four and had a lumpy texture.

People generally prefer homemade A and Chipotle. Homemade A had flavours that were clean and the taste of avocado really came out. Chipotle’s guacamole was also popular as the flavour was also fresh and clean but there was also an earthy/grassy flavour to it that people found refreshing. Homemade B and Mad Mexican had the addition of spices which taste testers found to be distracting or overpowering to the taste of the guacamole. 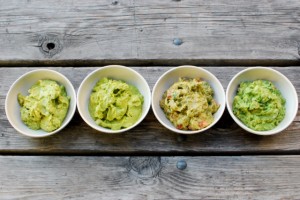 Bottom line:
Both homemade A and Chipotle’s guacamole were the favourites from this taste test. As a general rule, stick to simple flavours with guacamole and showcase the freshness of the ingredients. Both homemade and take out (from Chipotle) are the way to go when it comes to guacamole and are similar in cost. Who would have thought? I personally think that Chipotle should consider widespread distribution of their guacamole based on the results of this taste test. I would definitely buy it. Overall, it will still be slightly cheaper to make guacamole from scratch but if you want an appropriate portion size and aren’t stuck with a bowl of guacamole to finish, head over to your nearest Chipotle.