I was in the grocery store the other day and realized- it’s apple season! There were all these wonderful varieties on display, the majority boasting that they were from Ontario. And several of them were on sale – which one to choose?

This got me thinking that the way that I normally buy apples – I usually choose whichever ones are are sale (although I do have a bit of a preference for Gala). Sometimes I step out of my box and try a Fuji apple which I think tastes somewhat similar but I never have a done a side by side comparison. I really don’t put a lot of thought into what kind of apples I buy.

Then I figured, this would be a great opportunity to do a taste test. Ontario grows and cultivates so many varieties of apples, it’s a shame that I don’t know more about them. Since there are so many types of apples on the market, I decided to make this into a three part taste test series. The reason being that I didn’t want to overwhelm the panel with a dozen different types of apples to try all at once.

This taste test will focus on crispy, sweeter apples with a red/pink skin or a combination of red/yellow.

Here are the following types of apples that we will be taste testing today:

My thoughts:
I think there will be definite flavour differences between each variety but they will be similar in terms of sweetness and crunch. I hope the Gala or Honey crisp apples will win out because I would love to support local industry and hope to be able to tell the different in terms of freshness. I’m curious to try ambrosia – I wouldn’t mind supporting theses either because they were cultivated in British Columbia (my home province). However, I wonder the transit time will affect the flavour and quality. Fuji apples are also imported so it will be interesting to see if people can taste the different in terms fo local tasting fresher. 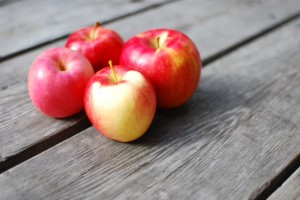 Taste testers:
Please try each apple and comment on crispness, sweetness and flavour. Which one do you like the most and why?

The results:
What a great taste test! It looks like several people have switched over to a new favourite – Ambrosia (including myself). People really liked the fact that the sweetness, crispiness and flavours really came out with each bite. Honey Crisp was also a favourite for people who prefer a more tart flavour.

The bottom line:
The type of apple that people prefer really depend on people’s personal preference (crispiness vs. sweetness vs. tartness) but people unanimously didn’t like the Fuji (from China) – it tasted watery and was not very flavourful. It seems that perhaps the transit time affects the flavour.

I will be sure to look for Ambrosia but will enjoy the occasional Honey Crisp when I feel like something more tart and when they are in season. Honey Crisp are really expensive compared to the other apples ($1.99 vs. $0.99/lb) but lots of people seem to like them. This is probably due to the fact that they are a fairly new variety of apple that have gained popularity and are cultivated locally in Ontario. However, the season for Honey Crisps is very short (September to October) so I guess it would be nice to indulge and enjoy these while you can. They used to be difficult to find but they can now be found in most major grocery stores.

Few people had heard of the Ambrosia and I don’t see these around as much in general. These ones are cultivated in BC. Perhaps it’s just a matter of time until we see these in major grocery store shelves as well.

6 thoughts on “An apple a day….but what kind of apple?”