A couple of the coworkers in my office made a great suggestion the other week – to do a taste test on local produce vs. imported vs. organic. There are a number of farmer’s markets in Toronto that take place during the summer months plus there is a big push to support locally grown produce.

Thing is, even though the produce is coming directly from the farm and you’re supporting local businesses, there is a bit of a price to pay (literally). Many of the products sold at the farmer’s marketst are more expensive compared to their imported counterparts that you can find at the large grocery store chains. 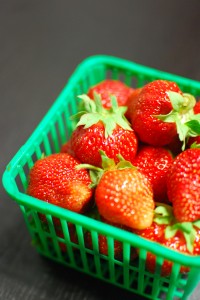 Is it worth it to buy local produce when it costs a premium? Personally, I think it’s all going to come down to taste.

Since it’s strawberry season right now (and the season only lasts for a few weeks in Ontario), we decided to use strawberries for this taste test. 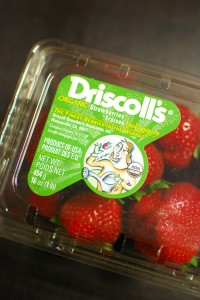 My theory:
I have to admit that the cost difference is quite staggering. Both local and organic strawberries cost $5/pint while imported ones cost $3/pint. It makes me wonder if the local or organic strawberries will taste so much better that it warrants paying nearly twice as much.

I have a feeling that the imported strawberries might still come out on top from a flavour vs. value standpoint. It will be interesting to see if the flavour of the local strawberries is convincing enough to make it worth paying a premium for them.

Taste testers:
Please try each of the strawberries and comment on flavour and appearance.
Which one do you like the most and would you be willing to pay twice as much for the ones you prefer? 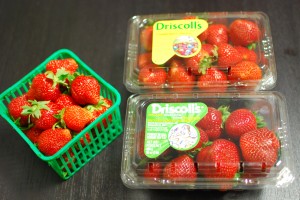 The results:
Most of the taste testers preferred either the organic or the local strawberries but indicated that the taste differences weren’t significant enough to warrant paying a premium. However, it seemed like the choice to support local farmers was more of a motivating factor to buy local. It looks like we have a number of responsible consumers in our group.

However, it’s been a wet season in Ontario and the strawberries aren’t as sweet this year so that is also a factor as well. 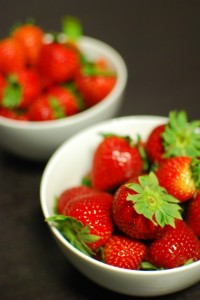 I preferred both the organic and local strawberries. They both were similar in flavour and sweetness but the local strawberries were slightly sweeter/more flavourful. They both cost $5/pint so knowing this, if I had to choose between the two I would choose to buy local because they do taste better (although I don’t know if it’s worth paying twice as much).

The bottom line:
Overall the local strawberries did taste better (but most people agree that it’s not worth paying twice as much). However, you are supporting local industry and since the strawberry season is so short in Ontario (3-4 weeks)if the growing seasons are good that year, I would be inclined to pay more for more flavourful strawberries. You support the local farmers and you might as well enjoy sweeter local strawberries while you can.

I was totally surprised that the organic strawberries tasted different than the non-organic. Theoretically you wouldn’t think that this would be the case but in this taste test there was a noticeable difference.

But from this taste test it looks like it all boils down to personal preference.

12 thoughts on “Strawberries – Local vs. imported vs. organic”