Skip to content
Another ‘convenience item’ that I decided to test out was cake mixes. Are cake mixes really so bad? I find them revolutionary – everything is pre mixed in a box and you just have to add eggs, oil and water. Brilliant! I also have a confession – for the longest time I believed that the way you made a cake was actually from a cake mix. You can believe the shocked faces I received when I decided to have some friends over to “bake a cake” and I pulled out a mix. I said “How else do you make a cake?” Their response: “With flour, sugar and eggs.” Now, in my defense I had grown up in a household where all I saw were cake mixes in the pantry and that’s all I saw my mom use when she had to make a cake so I just assumed that’s where cakes came from! 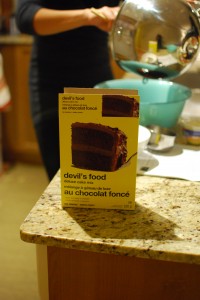 My thoughts:
I’m secretly hoping that the taste testers won’t be able to tell the difference between the cupcakes made with a cake mix and the ones made from scratch. I hope they choose one of the cake mix cupcakes! Measuring and sifting all the ingredients for devil’s food cake (cake flour, cocoa powder, sugar, baking soda, salt) is a pain. And then you have to mix them all together in a certain order. It’s actually quite technical in addition to being time consuming. And with people’s busy schedules these days – who has time? I would personally much prefer to open up a box, add eggs, oil and water and be done. The taste difference for the cake made from scratch had better be worth the extra effort.

Taste testers:
Please try each cupcake and comment on the taste, texture and appearance. Please indicate which one you like the most.

The Reveal:
Thank you everyone for your comments. Here are the results:

The results from this taste test were pretty inconclusive which I found pretty interesting. The no-name cake mix was a deep, chocolate brown color. This one looked the most decadent out of the three (but tasted the most flat, dry and least chocolately), The cupcakes made from scratch looked more caramel colour in appearance (however, they were more moist and flavourful). The Duncan Hines cupcake was somewhere in between in terms of color but just as moist and flavourful as the homemade cupcakes. In terms of taste, both the cupcakes made from scratch and with a Duncan Hines mix were moist and flavourful. Either one of these win from a taste standpoint, but the Duncan Hines gets bonus points for being a darker, richer color.

The Bottom Line:
Making a cake from scratch is quite time and labour intensive compared to using a cake mix. Not only did all the ingredients have to be measured out but they had to be combined in a certain order making this method a lot more technical. However, the main benefit of making something from scratch is that you can tweak the ingredients to your liking. For instance, you could use a very high quality, dark chocolate to give the cupcakes a very rich, dark and delectable flavour. 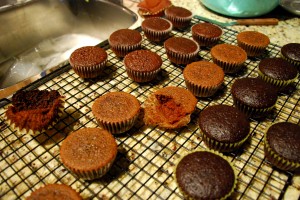 But based on the results of this taste test, I would choose a cake mix over making a cake from scratch (unless the type of cake I want to make isn’t readily available in a mix).

8 thoughts on “From scratch versus cake mix: Devil’s Food Cake”