This experiment involved making three batches of cupcakes: One batch using a no name brand cake mix, a second batch using a name brand cake mix (Duncan Hines) and a third batch making cupcakes from scratch. Part of the reason why I made three types (and not just my usual two) had to do with the fact that my coworker brought in both a no name and a brand name cake mix for me (I know that she always was interested in doing a no name versus brand name experiment to see how they compare – sneaky!). And of course I had to compare it against the control (cupcakes made from scratch). The main purpose of this experiment was to see if you can cut corners without sacrificing the quality of the end product (and to see whether or not people can tell the difference a cake made from a mix or from scatch).

So here is what was involved for each batch of cupcakes:

Throw everything into a large mixing bowl and mix until everything is incorporated. This batter, when mixed was the most runny out of the three but the darkest in color. It did become more sticky and dense as the batter sat out. This batter also resulted in the most dense but driest cupcake. However, the rich dark color ranked it the highest in terms of appearance.

Okay, so there is a lot more going on and a lot more ingredients (i.e. sifting and measuring out) involved with this batch. The butter and the sugar needs to be creamed, the cocoa dissolved in boiling water and then added to milk (and cooled) and the flour, salt and baking soda need to be sifted and mixed. Then you have to combine the wet ingredients (butter, sugar, eggs, vanilla and cocoa mixture) with the dry ingredients (flour, salt, baking soda) until everything is well incorporated. This mixture was the lightest in color of all three but the mixture was the thickest in consistency.

My observations:
Making a cake from scratch is quite time and labour intensive compared to using a cake mix. Not only did all the ingredients have to be measured out but they had to be combined in a certain order making this method a lot more technical. However, the main benefit of making something from scratch is that you can tweak the ingredients to your liking. For instance, you could use a very high quality, dark chocolate to give the cupcakes a very rich, dark and delectable flavour. However, I just used regular cocoa as I wanted to give the cake mixes a fair shot. 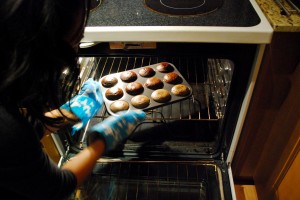 When baked, it was interesting to see that both the cake mix batches rose whereas the home made cupcakes did not. The no name batch actually looked the nicest due to its rich, dark color (it was also the heaviest and the driest) and the homemade cupcakes looked more caramel colour in appearance (however, they were more moist and flavourful). The Duncan Hines batch was somewhere in between in terms of colour but just as moist and flavourful as the homemade cupcakes. I actually liked this Duncan Hines batch the most based on flavour and appearance.

I would have thought that the second and third batch that went in the oven would have risen less than the first batch because the cake batter had been sitting out for awhile but there was no noticeable difference. I did have the luxury of tasting the cupcakes as they came out of the oven. I noticed that the flavour differences are more pronounced when they are still warm versus once they’ve cooled. I actually preferred the Duncan Hines batch the most, then the homemade batch and then the no name batch.