Last month, I decided to have a ‘poutine party’. Well, it was really an Oscar party where one of the items on the menu was poutine so I decided to kill two birds with one stone and make poutine while watching the Oscars.

I love having parties like this because I find that the environment becomes more relaxed and interactive (if you trust other people in your kitchen that is). Fortunately for me, one of my guests that evening was no stranger to deep frying so I had her handle the deep fat fry station (something that is still quite foreign to me).

There are two main ways to cook French fries: deep fried or baked

For the French fry taste test we made both French fries and sweet potato fries by deep frying them and baking them. We also bought a frozen/store bought brand (McCain® Superfries®) to see if would be worth using this shortcut (short answer: it depends on the brand).

We used russet (i.e. baking) potatoes which are THE potatoes to use when making French fries due to their high starch content. They are crispy on the outside and fluffy on the inside. We also made sweet potatoes fries as well (for a more flavourful/healthy option).

Here are the French fries we made that evening:

The group preferred the French fries (both the ones made with russet potatoes and sweet potatoes) that were baked! They could taste more of the potato flavour compared to the ones that were deep fried which had a more muted flavour (probably from the amount of grease). We also found that baking the French fries was a lot less hassle.

Deep fat frying requires you to cook the potatoes twice (once on lower heat to cook them and a second time on higher heat to crisp them up). We found the whole process of cooking them, drying them on paper towels and cooking them again to be quite labour intensive. It was still faster than baking them (which took 40 minutes) but baking allowed us to have more inactive time (where we were able to do more more entertaining things – like watch the Oscars).

We noticed that the sweet potato fries didn’t get as crispy as the French fries made with russet potatoes. This is typical because sweet potatoes have a higher water content so restaurants will sometimes coat them in batter or bread them to give them more of a crunch factor.

However, despite being less crispy we thought the sweet potato fries were delicious and they ended up being our favourite! They were much more flavourful than the fries made with russet potatoes (which weren’t bad either, mind you).

We were very disappointed with the frozen/store bought McCain® Superfries® which were tough and tasted bland (“similar to cardboard” is what one person said). It doesn’t take a lot of time to cut up a couple potatoes (and it’s good practice for your knife skills) so we found that the short cut of buying frozen French fries was not worth it. 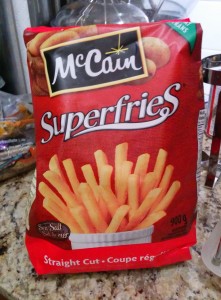 Oven-baked fries were the overall winner!

I was so happy with the results of this experiment. The healthier option ended up tasting better and was easier to prepare! It feels so good to be able to recommend a healthier option which produces a better result that doesn’t really require any compromise.

There is still a benefit to deep frying however. It’s a lot faster so you can make more in a shorter amount of time. With baking you have to spread the fries out and make sure they aren’t touching each other. This is key if you want crispy French fries so you are definitely limited in terms of how much you can make at once. If you’re having a huge party and need to have fries ready to go throughout the day, deep frying is your best bet. They also brown more evenly.

However, I’m totally happy having a single serving of poutine at a party and having other foods to choose from (that aren’t deep fried).

Directions:
Preheat oven to 450 degrees.
Cut potatoes into matchsticks (1/4 inch pieces). Soak the potato pieces in water for about 20 minutes.
Remove from the water and dry very well with paper towel.
Place in a bowl with olive oil and salt. Give it a quick toss. Spread out on a baking sheet, making sure to they aren’t touching each other.
Bake for 15-20 minutes on each side.

How to make poutine

We used the fries to make poutine and it wouldn’t be poutine without cheese curds and gravy. Here is an easy mushroom gravy recipe that you can make in a snap (it’s vegetarian as well). You can buy cheese curds are most cheese shops or just grate your favourite cheese on top.

Directions:
Place dried mushrooms in a bowl and cover with simmering water or vegetable stock.
In a saute pan over medium heat, add minced shallots and cook until softened and lightly browned (about 2 minutes).
Sprinkle flour over the shallots and stir well with a whisk or wooden spoon. Slowly add some of the mushroom stock and continue to whisk well. Continue adding stock until all the liquid has been added to the shallots.
Once combined, bring liquid up to a simmer and add thyme, soy sauce, lemon juice and ground black pepper.
Simmer until reduced and slightly thickened. 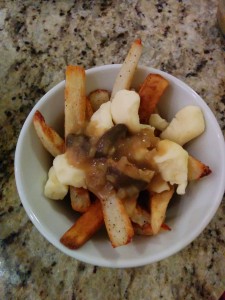