Like most kids, I grew up on the macaronic and cheese that you find in a blue box. It wasn’t until I was well in my late teens/adult years that I had real macaroni and cheese (made with elbow macaroni, real cheese and a bechamel sauce). Don’t get me wrong, there’s a time and a place for the mac and cheese that comes out of a box (it’s easy and super cheap) but it’s ultra processed the powdered cheese isn’t real cheese. Even the noodles are different.

In the after school program where I teach virtual cooking classes, I decided we were going to make REAL macaroni and cheese. Bechamel sauce, cheese, breadcrumbs, the whole nine yards. I call it “restaurant mac and cheese” because it’s the version you find at restaurants.

I’ll admit, I was a little nervous leading a group of 7-12 year olds on how to make a roux and bechamel sauce. The parents are in the kitchen with them but it still requires a bit of technique (and even adults don’t get it right). In culinary school it took me multiple attempts until I finally got the roux right so that the sauce would thicken properly. Before that, I would always end up with a watery sauce. The key is to cook the roux down so most of the liquid is gone and you are left with a paste that looks similar to toothpaste (that’s what I tell the kids). Add a small amount of milk at the beginning and if it thickens up right away it will give you a good idea as to whether you got the roux right. From there, you are on the right track.

However, I do mention that although this dish is substantial enough to eat on its own, adding a side of steamed broccoli or sauteed vegetables would help round it out. You can also treat it as a side dish along with some sort of protein (e.g. roast chicken) and some vegetables.

I was well into my adult years when I made my first bechamel sauce and here I had a group of seven to twelve year olds (and their parents) who totally rocked it. I particularly loved the message that appeared in the chat just as I was ending the Zoom meeting – “OMG, it’s delicious!” 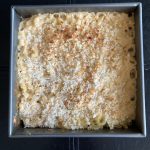 For the breadcrumb topping:*