I remember the first time I attempted to make chicken pot pie. The recipe was way too complicated and I gave up half way through. It called for roasting bone-in chicken breasts for 35-40 minutes before even getting started on the rest of the recipe. About an hour into it, I was too tired to continue so I settled for having baked chicken dinner. I have tried other chicken pot pie recipes since then and developed a version where you can make chicken pot pie (from scratch) in under an hour. It involves making biscuits for the topping instead of puff pastry or pie crust. This rustic version is easier (and way faster).

You can either bake the biscuits on their own and place them on the chicken filling at the end or make the chicken filling, place the raw biscuits on top and bake everything together in the oven. This is usually how it’s made but I know some people who prefer to bake the biscuits separately in order to avoid the soggy bottom. It doesn’t really matter since you’ll be dipping the biscuits in with the filling anyways, but if you want the option of having the biscuit on the side, baking them separately is not a bad option.

To be honest, the chicken filling is so delicious on it’s own I would be totally happy having it on some plain noodles or rice instead of making biscuits. 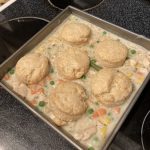