Aquafaba is the liquid from cooked beans. Most of the time people think of chickpea liquid when they hear the word aquafaba but it can come from any cooked bean. Chickpea liquid is often used because it has a milder flavour compared to other beans.

How do you make aquafaba meringues?

The methods for both the aquafaba meringues and French meringues were the same. Whip up the room temperature aquafaba (or egg whites) with a bit of cream of tarter, and slowly add in sugar one tablespoon at a time. Whip up the mixture until it forms soft peaks, pipe the meringues onto a parchment lined cookie sheet and bake in a low (200 F) oven for 1 to 2 hours.

I noticed that the aquafaba meringues took longer to whip up to soft peaks and the mixture was a bit more loose than the French meringues. When I piped them onto the baking sheet with a star tip they also didn’t hold their form as the ridges smoothed out so they look more like Hershey’s kisses instead of piped rosettes.

I also noticed some weeping (moisture seeping out of the bottom) during baking and they expanded slightly while baking so I ended up with one big sheet of meringue instead of individual cookies.

The meringues that were made with egg whites formed soft peaks faster, kept their shape when piped and didn’t expand or weep during baking. I also found the mixture easier to work with because it wasn’t as loose. I preferred the flavour of these ones slight more because they didn’t have the chickpea taste (they taste like egg whites, naturally) and I found the texture to be slightly less grainy. But you really wouldn’t be able to notice the difference in texture unless you tasted them side by side.

In terms of texture, aquafaba meringues look, feel and taste the same as egg white meringues except there is a very slight chickpea flavour that you can taste towards the end. But the main flavours your detect are the airy texture and sweet taste. Once you add additional items to the dessert (fruit, rasberry coulis, lemon curd, etc) you can’t really taste the chickpea flavour.

I would say that the egg white meringues were easier to work with because they whipped up faster, held their shape and didn’t weep or expand during baking. Having said that, I could reduce the issues I experienced with the aquafaba by beating it for longer, boiling it over the stove to reduce some of the water content or use a different brand that has a thicker liquid. I have seen other pastry chefs use aquafaba with very good results so it might just be a matter of choosing the right brand of canned chickpeas.

Pros and cons of aquafaba meringues vs French meringues

Overall, I would say that aquafaba meringues are a great option for people who are vegan, have egg allergies or who want to use chickpea water to make something instead of just throwing it down the drain. The next time I open up a can of chickpeas, I am going to keep the aquafaba in a mason jar and use it to make meringues toppings on lemon tarts or lemon bars. I love the fact that I don’t have to use and separate eggs (which is a hassle because I don’t always want to have to make something else to use up the yolks). One could argue that could also just buy a carton of egg whites and use that instead (which is true) but I don’t make enough desserts to go through a whole carton of egg whites. So in this case, the liquid from the canned chickpeas works fine for me!

Not all aquafaba is the same and it can vary depending on brand. I might try using a different brand or reduce the amount of water by heating it over the stove first. That should prevent the mixture from being so loose and they will hold their shape.

Here are the recipes that I used so that you can try this experiment at home. Whether you have extra egg whites or chickpea water kicking around, both produce good meringues. 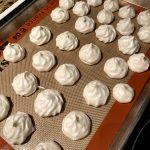