I grew up on Campbell’s cream of mushroom soup. It was one of my favourite comfort foods growing up. In addition to just eating it as a soup, I have also seen it used as a base for mushroom gravy and for various casserole dishes. The versatility of the product makes it a good pantry staple, however, since the focus of my blog is to compare store-bought versions against homemade versions I decided it was time to face another one of my favourite convenience items – Campbell’s cream of mushroom soup. 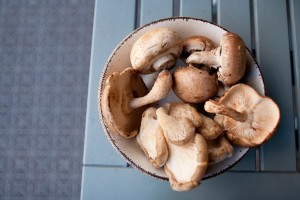 Of course this wouldn’t be a true Confessions of a Dietitian taste test unless I tried making the healthier version. So I made two types of cream of mushroom soup: one using heavy cream and one using half-and-half.

I had everyone sample each type of cream of mushroom soup and comment on any taste differences that they noticed. I also asked them to indicate which one they liked the most. Here are the three types that they sampled:

From a visual stand point, you could really see the pieces of fresh mushrooms in the homemade versions. The homemade versions were more beige in color (due to the butter in the recipe) which gathered and pooled along the edge (there was slightly less pooling in the full fat version – fat is a good emulsifier). The canned soup didn’t have any pooling of butter/oil along the edge but it also looked pale in comparison. You could barely see any mushroom pieces.

From a flavour standpoint, both the homemade full fat and homemade lower fat soups had a stronger mushroom flavour compared to the canned version. The canned version tasted watery in comparison and the mushroom flavour was not as pronounced. Although the texture looked more homogenous in the bowl, it was not as smooth when we tasted it (there is something about fat that emulsifiers just can’t replicate). The taste testers also noted that it tasted a little chemically but overall, it was actually pretty good considering that it came out of a can. What can I say, Campbell’s does make good soup.

However, the flavour of the homemade versions were still much better and when making cream of mushroom soup it should really taste like mushrooms. As a result, the homemade versions came out on top due to their stronger mushroom flavour and smoother texture. In terms of which homemade soup tasted better, I personally couldn’t taste a significant difference between the soup made with heavy cream and the soup made with half-and-half. If anything, the heavy cream soup had slightly (i.e. hardly noticeable unless you were really looking for it) more flavour and was slightly thicker (again, only if you were really looking for it). But with heavy cream soups I always end up feeling very full after eating them so I actually prefer the soup made with half-and-half. It has all the flavour of the full fat version without being so heavy.