Skip to content
This weekend, a fellow foodie and I planned an afternoon of baking. We wanted to try out a vanilla cupcake mix that I received as a gift. It came in a very cute package with instructions on how to make a dozen cupcakes as well as icing.

We figured that since we were in the process of baking cupcakes, we might as well bake a batch of vanilla cupcakes from scratch (go figure). Can a cupcake mix taste as good as cupcakes make from scratch? I was attracted to the packaging and the fact that it included instructions for making a dozen vanilla cupcakes plus icing. 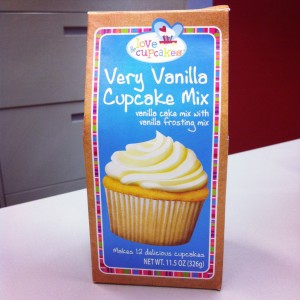 Today we will be trying two types of vanilla cupcakes: one prepared using a mix and one prepared from scratch.

Taste testers:
Please try one of each cupcake. Please comment on the appearance, texture and taste. Do you notice a significant difference between the cake and icing for each one? Which one do you like more?

Side note:
My friend also gave me a package of decorative cupcake liners which are great for presentation but also serve a functional purpose – they are made of a sturdier paper and claim to be strong enough to use instead of a muffin pan. These cupcake liners did prove to be strong enough to use without a muffin pan and they also made the presentation of the cupcakes very sophisticated. It’s great that these proved to beneficial from both a practical and presentation stand point!

Thank you everyone for posting your comments. Here is the reveal: 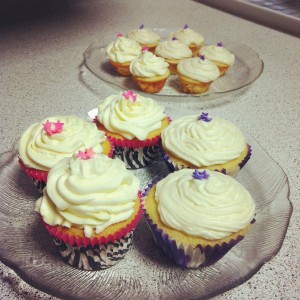 The results:
The results were split down the middle with some people preferring the pink cupcake and others preferring the purple cupcake. Some people could taste the vanilla more in the purple cupcake and a denser texture. This is probably because the cupcakes made from scratch had vanilla and whole eggs in their recipe. The cupcakes made from a mix didn’t call for vanilla or egg yolks (you had to separate the eggs and just use the egg whites) which resulted in a lighter texture which is also something that the taste testers noticed. 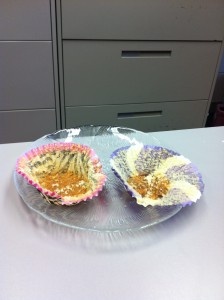 Bottom line:
If it weren’t for the fact that I was tasting the cupcakes side by side, I wouldn’t really be able to tell that one was made from a mix and the other from scratch. If you’re pressed for time when making cupcakes, use a mix and spend the extra time decorating (this is where it really counts).

10 thoughts on “Vanilla cupcakes – Can you judge a cupcake by its cover?”