For this taste test we bought The Decadent Molten Lava Cakes by President’s Choice ($6.99/4 servings) and Sensations by Compliments Molten Chocolate Lava Cakes ($7.99/4 servings). We then made our own molten lava cakes and tasted all three against each other. The frozen versions come pre-portioned in plastic cups that you pop them out of onto a baking sheet for baking. That’s it! Instant lava cakes in 15 minutes. 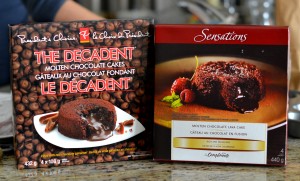 The homemade version is quite a bit more involved (obviously, since we are making it from scratch). There are a number of steps such as melting the chocolate, separating the egg whites and beating them into stiff peaks and folding the ingredients together. I have to admit, it does take quite a bit more effort. But with everything homemade, you have the ability to control the ingredients that go into it. There aren’t a lot of ingredients that are needed for molten lava cakes but I definitely wouldn’t skimp on the chocolate – buy a good quality one like Lindt or Valrhona. 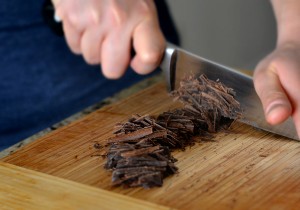 I did some quick math and it actually cost about the same amount of money if you were to make the lava cakes from scratch. It’s because high quality chocolate such as Lindt, Valhrona (or Purdy’s in my case which I had lying around) has a tendency to be expensive. Good quality always does. Here is the recipe I used for making the molten lava cakes from scratch: 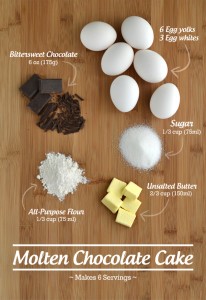 Both of the store bought, frozen versions (President’s Choice and Sensations by Compliments) took longer to bake (15-17 minutes) because they were previously frozen but the preparation involved with the homemade version definitely takes longer than that (I would estimate around 30 minutes, plus you have to pay attention). Baking them off only takes 5-7 minutes though. 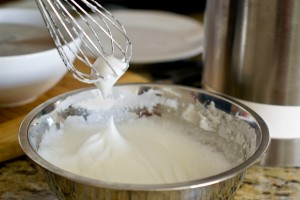 They all looked equally attractive once they were baked so it really was a matter of taste when deciding which lava cake would come out on top. Both of the frozen lava cakes tasted very similar to each other. 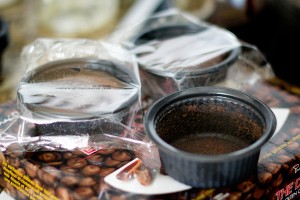 We could definitely taste the difference with the homemade lava cake. The chocolate was more semi-sweet than sweet. The chocolate flavour of the frozen/store bought versions tasted more commercial/mainstream (i.e. it was more sweet than bittersweet). I can see this appealing to the masses. You can totally get away with buying lava cakes frozen. (I know! I can’t believe I’m saying that.) 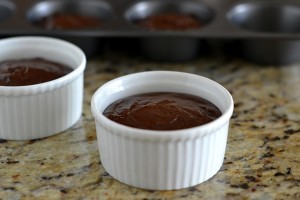 An interesting note is that we were all feeling really full after tasting the lava cakes. I looked on the package and saw that each lava cakes is approximately 400 calories! That’s close to the amount of calories that some people have in an entire meal! This is definitely a ‘once in awhile’ dessert (or meant for sharing).