Skip to content
In the spirit of Thanksgiving, I decided to do another pumpkin pie taste test this week (but really, there’s a can of pureed pumpkin that’s been sitting in my pantry for the past year that I’ve been wanting to use up).
During the last pumpkin pie taste test, I realized how easy it is to make pumpkin pie. I also learned that people preferred canned pumpkin verses canned pumpkin pie filing and that using a frozen pie crust can be just a good as using one that’s homemade. So, if making pumpkin pie is just a matter of mixing a few ingredients and pouring it into a frozen pie shell, why not just take the ultimate short cut and buy one already made at the store?

A few things about canned vs. fresh pumpkin:
The thought of using fresh pumpkin for a pumpkin pie taste test did cross my mind. But after doing some research on the subject, it turns out that various sources indicated that using fresh pumpkin generally isn’t worth the extra effort. It depends on the freshness of the pumpkin and the water content can vary depending on the process whereas canned pumpkin is highly standardized.

My thoughts:
I am secretly hoping that the store bought pumpkin pie will come out as the winner. If it’s really as easy as opening up a can of pureed pumpkin, stirring in some spices and pouring it into a frozen pie shell, why not just take the ultimate short cut and buy one that’s already made?

With pumpkin pies being sold at the grocery store for $6.99 (or on sale for $3.99) the price can’t be beat. It’s even cheaper than buying the ingredients not to mention the time it takes to actually bake it. Does a homemade pie taste that much better that it’s worth the effort? Let’s find out! 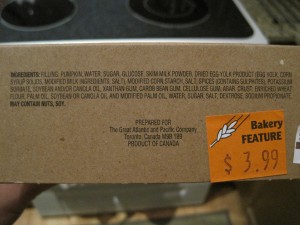 Taste testers:
Please taste each pie and comment on taste, texture and appearance. Which one do you like more?
Is it worth it have a homemade pie when it takes a lot more time, effort and costs twice as much?

The reveal:
Thank you everyone for posting your comments. Here are the results:

However, most individuals noticed the difference in texture in that the store bought pumpkin pie was more mushy and not as custardy/silky in texture as the homemade pie.

Note: The store bought pie that was used for this taste test was actually frozen before hand and was thawing out on the grocery store shelf when I bought it. I think that there are some structural changes that occur during the freezing/thawing process. (the filmy top part layer that some taste testers noticed is probably a result of this). 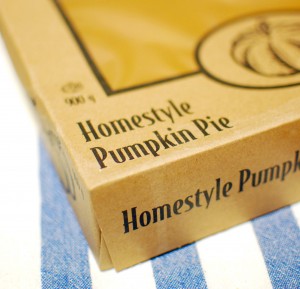 So if you have the time, make your own pumpkin pie but if you’re in a pinch for time, store bought will be just fine (but not quite as good).

My observations re: homemade vs. store bought:
These taste tests have really brought to light the point that it really depends on how seriously you take certain desserts/foods and what your personal preferences are. The pumpkin pie connaisseurs in the group preferred the homemade pumpkin pie hands down whereas the people who didn’t have pumpkin pie that often didn’t notice as big a difference between the two pies.

Another point is that, both the store bought and the homemade pies were simple pumpkin pies. If you used recipes that called for more ingredients/variations (more spices, maple syrup, etc) you’d be hard pressed to find this kind of pie in a standard grocery store. If you really value a good pumpkin pie, or have a secret family recipe that is more complicated than your standard pumpkin pie – it’s best to make it from scratch.

So to summarize, homemade products are good for the following purposes:

But are these reasons enough to make it worth putting in the extra time and effort?

It really depends on the individual, their background, their aptitude in the kitchen, their resources and how much they value the points listed above.