Skip to content
The sugar vs. sweetener debate continues. In a previous taste test, we tested out two artificial sweeteners – Splenda (sucralose) and Equal (aspartame) to see how they performed against sugar. We did the ultimate test which was to test these ingredients out on sugar cookies which I have to admit, was quite unforgiving. The biggest difference we noticed was in the texture of the cookies.

So for my next experiment, I decided to bake something where texture was not such a critical component. I decided to bake blueberry muffins (I also chose this because it just happens to be the recipe that’s on the back of the Splenda box.) Let’s see how sweetener compares to sugar with this recipe. Is it possible to bake with sweetener and get an acceptable product that’s just as good (or possibly even better) than sugar?

My theory:
Since I’m using the recipe that’s on the back of the Splenda box, I’m expecting a pretty decent result from the Splenda batch. I’m curious to see if these muffins will turn out as good as the batch made with sugar. I’ve heard that sweeteners aren’t as good as absorbing water and they don’t have the browning properties that sugar has so it will be interesting to see what they look like when they’re done. 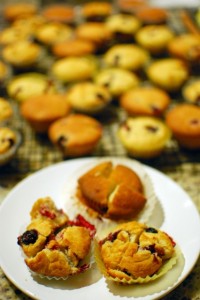 Taste testers:
Please try each type of muffin and comment on the taste, texture and appearance. Which one do you think is made with Splenda, Equal and sugar?

The Reveal:
Thank you everyone for posting your comments. Here are the results:
A: Splenda (sucralose) – yellow muffin liner
B: Equal (aspartame) – blue muffin liner
C: Sugar – pink muffin liner

My Thoughts:
Well, this was very interesting! The two batches that were made with sweetener look practically identical after being baked. The ones made with sugar looked completely different and browned a lot more. This is consistent with the expectations associated with the browning properties of sugar.

The Bottom Line:
It’s interesting to see that Splenda came out to be nearly as favoured as sugar and in many ways, performed better from a texture and appearance standpoint. However, this is probably  due to the fact that we used the recipe that was on the back of the box which are usually classic and overall favourite recipes. It will be interesting to see the results of an upcoming experiment which will involve me using a recipe that calls for sugar originally (and not Splenda).

This taste test also provides further confirmation that you can bake with Splenda but not Equal.