Skip to content
Most of us have had the classic sugar cookie – whether it’s during the holidays or if we just want a fun cookie to cut out into shapes and decorate. However, would sugar cookies made with sugar substitutes instead of actual sugar taste as sweet? We’re about to find out.

We used a classic sugar cookie recipe for this experiment to test out the differences in handling and flavour properties between sugar and sugar substitutes. Based on the results from a previous taste test, we selected the two sweeteners that tasted the most acceptable to be used for this baking experiment: Equal (aspartame) and Splenda (sucralose) (these sugar substitutes are also the ones that are most readily available in the baking aisle of most grocery stores). 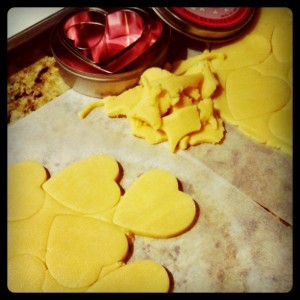 The method for this experiment was simple: Make three different batches of sugar cookies except switch the sugar for Equal and Splenda for each batch to see if there were any differences during the mixing, rolling and baking process.My theory:
I think all three products will behave similarly during the baking process however, I think that the cookies made with sugar will brown more as I hear that sugar substitutes don’t have the same browning properties that sugar has. 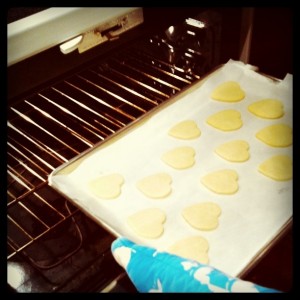 Taste testers:
Please taste each cookie and comment on flavour, texture and appearance and which sweetener you think it’s made with (sugar, Equal or Splenda).The Reveal:
Thank you everyone for posting your comments. Here are the results:

A: Splenda (sucralose)
B: Equal (aspartame)

My Thoughts:
I have to do the second reveal for this taste test and give them the cookies that were made with actual sugar. When I didn’t include them in the initial taste test, the taste testers didn’t suspect anything. But now that I’m giving them the real sugar cookies – I’m thinking that the taste differences between the cookies will be painfully obvious. 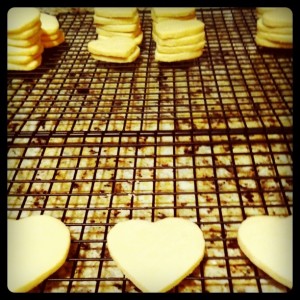 The Bottom Line:
Although when tasted in their powdered/unbaked form, sugar substitutes taste a lot sweeter than actual sugar. However, it appears that they lose their sweetness properties when baked. They both aren’t all that stable in the baking process with Equal losing more of it’s sweetness during the baking process. Splenda was able to maintain more of it’s sweetness and I would choose this sugar substitute when baking. However, neither product is as good as regular, granulated sugar. The cookies made with real sugar were definitely sweeter but the biggest difference was the texture – they were firmer and crispier than the cookies made with sweetener.

13 thoughts on “Sugar vs. Sweetener – Would a sugar cookie by any other name taste as sweet?”